For the second time our brand representative Max Nagl has been nominated as driver of the Motocross of Nations (MXoN). It is considered the most prestigious motocross race in the world. The World Team Championship will take place this year on September 24-25 at the legendary track in Redbud / USA. 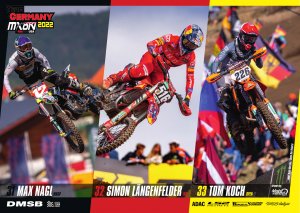 The Team Germany crew, formed by Max Nagl (MX1), Tom Koch (MX Open) and MX2 driver Simon Längenfelder has a high level of MX expertise. In Max’s case, this is particularly noticeable, as he is already considered an old timer at the age of 35, not only in motocross racing but also as a repeated participant in the MXoN.

This peaked in the for Germany ever first and only victory at the MXoN in 2012 in Lommeln / Belgium (Nagl / Roczen / Schiffer). The reward for the exceptional performance was the Chamberlain Trophy. In the same year, Max was also ADAC athlete of the year in the category of motorsport.

Max is also racing successfully for the Krettek-Haas Racing Team in the renowned ADAC MX Masters series with his #12. He is currently leading the championship with considerable points lead.

We wish the German national team, as well as all other 33 participating nations, the best of luck and the worldwide spectators a lot of fun at the impressive Motocross of Nations.

A special greeting of course to our driver